This time I bring you a couple of gameplay videos of Super Hero Squad Online, one of them playing as Iron Man and the other as Hulk. I recorded these videos while I was playing SHSO in the trial membership Jr. Shield Agent period.

The characters emoticons are very funny and you can unlock 2 more as you level. The maximum character level is 10 (I guess this will increase with future updates). Now, about the battle system, I think the game response is not the best, because sometimes you are not sure if you’re attacking the desired target.

I played Hulk in Asgard, Thor’s world. This world was recently added through a game update. I enjoyed playing with Hulk more than Iron Man, but I think that’s a matter of preference among the heroes. By the way, I bought Iron Man and Spider-Man Venom while I was Jr. Shield Agent member, but when the trial period expired I couldn’t use them anymore. : ( 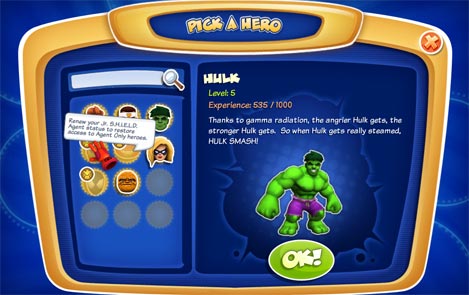 Jr. Shield Agent title means that someone is a paid member of the game, while the rest that play for free are called Jr. Shield Recruit. The benefits of pay for playing vs play for free are essentially thet being member you can win gold coins and not only silver coins, also you can buy heroes, missions, and other things designed exclusively for members.

While you are Jr. Shield Agent you win 500 gold coins per month, without counting the gold you can win in the roulette game. For members, the first roulette round is filled with gold coins, and as the player gets the gold the spots are replaced with silver coins. Roulette resets daily.

If a member account has expired the remaining gold on the roulette is preserved until the player collects all the gold. But the downside of the membership is that if you bought exclusive heroes and your account expires, you won’t longer play with them until you renew the membership again.

It seems unfair they block the exclusive heroes you have bought, because somehow you have paid for them in the game. You had to play hours to collect all the gold coins and silver coins to buy them, and that should be enough. If they want people to keep their membership active it should be enough with new amazing game updates adding new exclusive heroes, new regular heroes (for free accounts), new worlds, missions, etc.

Besides that, I think SHSO is actually a fun game, but mostly for children. I think for an older audience we must wait for Marvel Universe game.